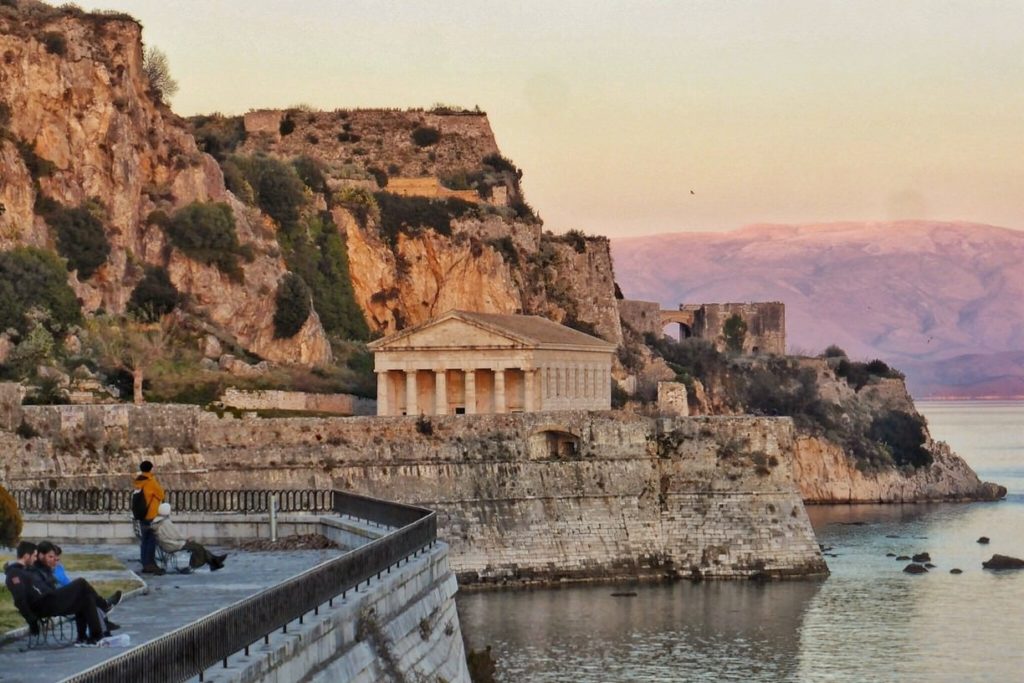 This was originally a natural promontory offering in it`s rocks protection for the residents of the 5th century AD when the ancient city of Corfu was moved here after the destruction of the ancient city by the Visigoths.Converted into a fortress by the Byzantines in the 8th century AD and contained all of the small medieval town.

The rock was always further reinforced to protect the city from the numerous invasions of the Middle Ages, and gradually the town grew around it.Later the Venetians, because of the Turkish threat, strengthened its fortifications, extended the bastions and dug the moat known as the kontra fossa separating the fortress from the land.

This way the Venetians created an impenetrable triple line of defense both by land and from the sea.Inside the old fortress in 1840 the Doric church of St. George was built by the British as a garrison church.

Most buildings that were inside the fort have now been demolished but deserving attention is the central gate, the bastions of Savornian, Martinengo and Mandraki, the towers of the land and the sea at the east, the English hospital and the English barracks, the clock tower and the lighthouse.

There is still a prison built in 1786 by the Venetians, which was later expanded by the British, the military chapel and the two English barracks in 1850.The military hospital now houses the Music Department of Ionian University.

The fortress also contains the historical records of more than six centuries of history, the Byzantine collection of sculptures and images of the Byzantine era, and the public library.

At the entrance of the fortress on the upper Esplanade is the statue of Prussian Marshal Johann Matthias von der Schulenburg, built by the Venetians in his honour after he successfully repelled the Turkish invasion of 1716.Today the fortress is a masterpiece of architecture and fortification art while offering visitors the best views of the city, its harbour, and over the sea to the mountains of Epirus.