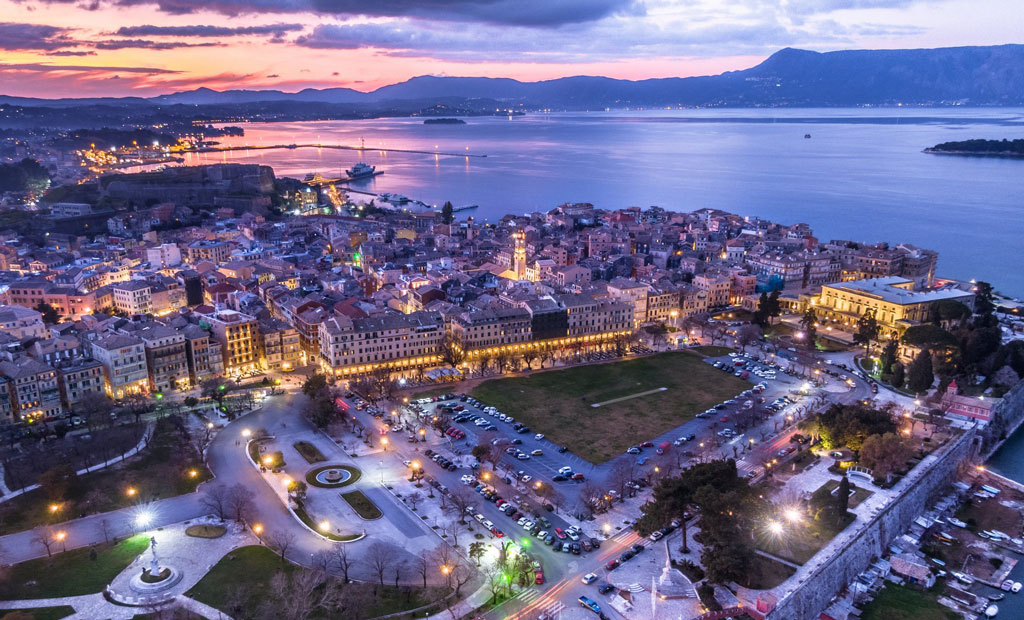 The Esplanade is the central square of Corfu and a meeting place for residents and visitors, surrounded by the streets of Iroon Politecniou at the east and north, Eleftherias and Kapodistriou to the West and Akadimias Street in the South, and crossed in the middle by Dousmanis street.Built in the style of the Royal Gardens of Europe it is the largest square in the Balkans and one of the largest in Europe.

In the square`s bandstand there are often concerts and other events, especially during the summer.Cricket matches are also frequently played there.Cricket is purely British sport which has been enthusiastically adopted by the Corfiots since the period of English domination of the island.
There are 12 cricket clubs and two other pitches on the island.Corfu Cricket team is the only cricket team in Greece and so is the Greek National Cricket team also.To one side of the square is the popular pedestrian area of The Liston with its French architectural buildings (modeled on the Rue de Rivoli in Paris) and numerous cafes.

The construction of The Liston began in 1807 by Napoleon, the sole purpose of the buildings construction was to house the French army.It was completed in 1814.The buildings were designed by French architect Lesseps and implemented with the assistance of the Greek engineer Ioannis Parmezan.Corfu Liston is a complex of buildings facing the Esplanade, with arched ground-floor galleries which the locals call “Volta”

The name was given by the word “list” which arrives from the Greek word “lista” that was used for the lista of the Nobles (Libro d `Oro) as at the old days only the nobility were able to walk in this part in the city.Today, the arcades of Liston are the busiest part of Corfu, it is filled with cafes, restaurants and craft shops in general, and one that is busy all year round .The walk in front of the Liston`s arches is something that every Corfiot does and taking coffee in one of The Liston`s cafes is a daily habit for many Corfiots.