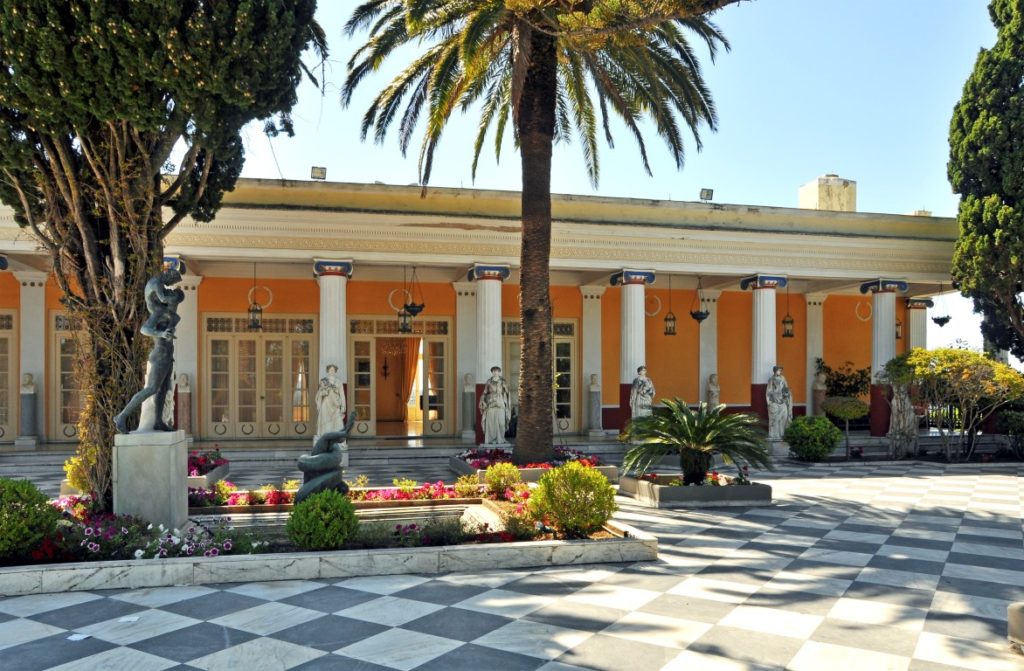 The beautiful Achilleion(Achillion) Palace sits 10 km south of the city of Corfu and three kms north of the village  of Benitses on the edge of Gastouri village.It was built by Empress Elizabeth of Austria who became known as the sad queen Sissy.

Elizabeth was the younger daughter of the Duke of Bavaria, and the Emperor of Austria, Franz Joseph, was told by his mother to marry her elder sister, but he fell in love with her instead.She felt stifled by the very strict protocol, dominating mother in law, and the regimented life in Vienna, and appears to have suffered minor breakdowns and depression frequently.

She travelled extensively for her health, and this became almost manic following the suicide of her son Rudolf, who shot himself and his mistress in a suicide pact at a hunting lodge called Mayerling.Coming to Corfu she fell in love with the estate of the diplomat and philosopher Petros Braila -Armeni, and he gave it to her.

She then demolished the simple house and built the Achilleion Palace.She was well known in the vicinity, and much loved as she had a well dug in lower Gastouri which saved the women walking long distances to get good water.Once the palace was finished however she lost interest in it somewhat, and came less frequently to the island.

On a visit to Geneva she was assassinated by an Italian anarchist, who later said that he had gone to Geneva to kill a sovereign, and did not mind which one he killed, as long as he succeeded!Elizabeth was an exceptionally beautiful woman, and a skilful rider.